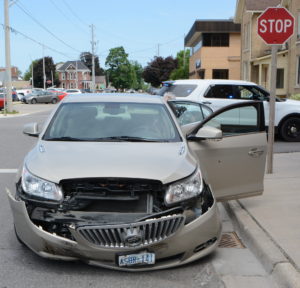 What appeared to be a two vehicle crash occurred at the intersection of John Street South and Sydenham Street in Aylmer on Tuesday afternoon, June 12. Both vehicles sustained noticeable damage, to the front of this beige Buick Lacrosse and to the driver’s side back passenger door of a grey Hyundai Santa Fe (not pictured). This photo was taken at about 3:15 p.m. that day. No one was injured. It was the third crash at that intersection over the past five days. The Aylmer Police reported two separate minor crashes that happened on Friday afternoon, June 8. No one was hurt in those collisions either. (AE/Craig Bradford)