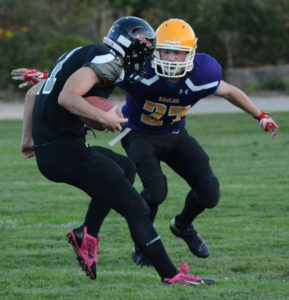 East Elgin Secondary School defensive back Nathan Baughman, right, gets ready to tackle a Tillsonburg Glendale receiver before he gets to the red zone in the EESS end during an exhibition game in Aylmer on Friday evening, Sept. 14. After a slow start, the East Elgin Eagles came from behind to defeat Glendale 18-8. The Junior boys game that was to be played before the Senior game was cancelled earlier that day by the Tillsonburg team. Both the Junior and Senior Eagles begin the regular season with the United Way Game at Parkside Collegiate Institute in St. Thomas on Thursday, Sept. 20, the Juniors kicking off at 6 p.m. and the Seniors at 8 p.m. EESS’s home opener is versus London Laurier on Thursday, Sept. 27 with the same kick-off times for both games. (AE/Craig Bradford)