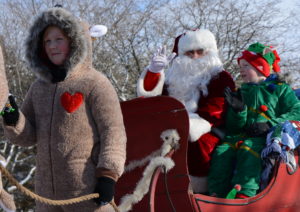 Santa Claus made his annual appearance in his namesake parade in Straffordville on Saturday morning, Dec. 8. He was accompanied by one of his little elf helpers and several of his reindeer. The just over half an hour long parade weaved its way through the village, starting at the marshaling area on Old Chapel Street next to Straffordville Community Centre, then east along Main Street, north on West Street, a slight jog northwest on Third Street, southwest along Plank Road and then west on Heritage Line ending at the community centre. Santa met with children in the hall to hear their gift wishes and they were treated to free candy bags, cookies and hot chocolate. (AE/Craig Bradford)