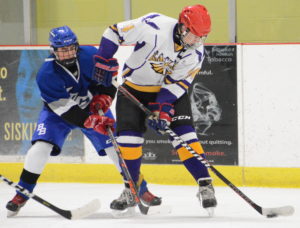 East Elgin Secondary School boys hockey team captain and left winger Correy Mantel, right, fought for the puck with an Ingersoll District Collegiate Institute opponent during the last regular season game of the season at East Elgin Community Complex on Monday afternoon, Jan. 14. The game ended as a 2-2 tie in regulation and Ingersoll won in the shootout by scoring once on their three chances while the Eagles went zero for three. East Elgin finished second with nine points and a four wins, one loss and one tie record while Ingersoll took first place with 10 points and a 4-0-2 record. The Eagles have a bye in the first round of the playoffs and are off until second semester begins. They’ll play the winner of a first round two out of three game series between Woodstock Huron Park and St. Thomas Parkside. East Elgin’s first game of the playoffs will be Tuesday, Feb. 12. If the Eagles win that series, they will be in the finals for another best two of three series. (AE/Craig Bradford)