A federal election was held on Monday, Oct. 21 in Canada.

With nearly half of all votes, Conservative candidate Karen Vecchio will sit for a second term as the Elgin-Middlesex-London Member of Parliament.

Nationally, the Liberals will stay in power, winning enough seats to form a minority government.

As of Tuesday morning, preliminary results for the riding as reported by Elections Canada were: 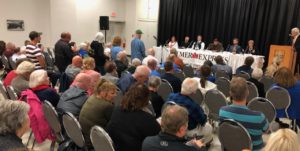 Candidates for the Elgin-Middlesex-London riding in answered questions from the pubic at one of two all-candidates meetings hosted y The Aylmer Express.

Read the Oct. 23 edition of The Aylmer Express​ for further election coverage.