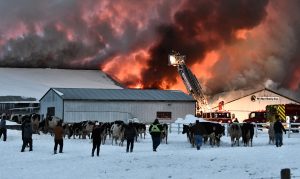 A major fire erupted in at least one barn at Walker Farms in Summers Corners on Wednesday, Feb. 17, just before 5 p.m. Firefighters streamed in from Malahide, Bayham, Central Elgin and Aylmer to fight the blaze, including Aylmer’s aerial truck, seen here. Meanwhile, workers drove cows that had been evacuated from barns towards waiting cattle trucks for transportation to safety. Malahide Fire Chief Brent Smith reported at 8:30 p.m. that the fire had been contained. He estimated that between 50 and 70 cows were lost in the fire, but 750 more were saved. The cause of the blaze is as yet unknown. More information as it becomes available, and full coverage in the Feb. 24 Aylmer Express. (AE/Rob Perry)