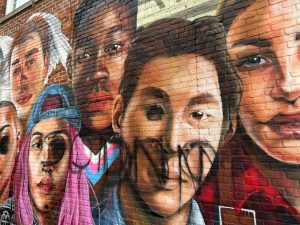 Someone spraypainted the word “SODOM” across a portion of a mural on the south side of 20 John St. S. in Aylmer during the early-morning hours of Saturday, May 14. (AE/Rob Perry)

A mural painted last year on the south side of 20 John St. S. in downtown Aylmer was vandalized sometime prior to Saturday, May 14, at 11 a.m.

Aylmer Police Chief Zvonko Horvat said sometime overnight, the word “SODOM” had been spraypainted over the mural. Anyone with information in the case is asked to contact Aylmer Police.

Amanda VandenWyngaert, curator of the Aylmer-Malahide Museum and Archives, said she was disappointed by the vandalism of the mural.

The museum had organized its painting by artist Meaghan Claire Kehoe, who had collaborated with East Elgin Secondary School students who wanted the spirit of the mural to revolve around youth, diversity and inclusivity.

The project had been funded by a bequest from the Estate of the later Donna Vera Evans Bushell.

Ms. VandenWyngaert said she wasn’t sure if the mural had received an anti-graffiti coating after being completed, but, at the advice of the estate, a portion of the bequest had been retained to pay for any needed repairs.

The artist was expected to come to Aylmer later this week to do so.