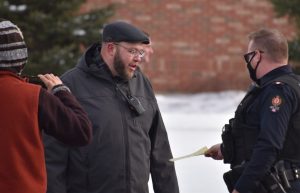 A Malahide man, 37, was charged with organizing an event that exceeded provincial pandemic restrictions banning more than 10 persons gathering outdoors, during a Sunday drive-in service at Aylmer Church of God on Sunday, Dec. 27.

The man was not identified by name, but an Express photographer on site at the time saw Herbert Hildebrandt receiving a ticket from police. He is the son of church Pastor Henry Hildebrandt. The picture is of Herbert getting the ticket.

The constable who handed the ticket to Mr. Hildebrandt returned to his nearby cruiser. Moments later, Mr. Hildebrandt ordered a group of men standing at the end of the church driveway “Don’t let him leave.” The men surrounded the constable’s cruiser, with the officer inside, and shouted at him.

A church videographer stood at the passenger window, pointing a video camera at the officer, while another man shouted, asking his name and address. Mr. Hildebrandt replied with the officer’s name. “Where do your kids go to sleep?” shouted the unknown man. Others stood behind the vehicle so it couldn’t leave.

“This is what a coward looks like,” said Mr. Hildebrandt.

Another officer arrived and cleared the men, while Mr. Hildebrandt added, “Let him go.”

Aylmer Police Inspector Nick Novacich said police received several complaints from the public about the drive-in service, because of individuals who were outside of vehicles.

Drive-in services are allowed in Ontario’s current “lockdown” pandemic restrictions, but the number of celebrants outside of vehicles are not to exceed 10.

Officers found more than 10 out of their vehicles and issued a summons to the Malahide man as the alleged organizer.

Insp. Novacich said a summons would also be issued to the church itself.

Officers found numerous vehicles parked along John Street North outside the church, the occupants peacefully protesting in support of the wearing of face masks, which church members have opposed.

Due to safety concerns and road congestion, Insp. Novacich said, the drivers of 15 to 20 vehicles were told to leave the scene, and they did so.