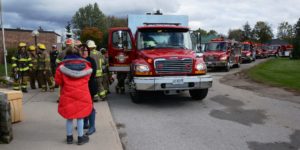 All of the pupils and staff at Springfield Public School were safely evacuated to the nearby Malahide Community Place after more than half of the school filled with smoke from a fire that broke out in the rooftop heating, ventilation and air conditioning unit (HVAC) on Wednesday afternoon, Oct. 17. This photo was taken at about 2:20 p.m. that afternoon. Malahide Fire Chief Brent Smith said the call about the fire came in at 1:50 p.m. and it was confined to the HVAC unit. Firefighters remained on scene to ventilate the school and make sure there was no carbon monoxide inside before releasing the building back to school officials. Principal Cindy Mallory said none of the 173 school children or about 20 staff were hurt. Read more about the incident in the Wednesday, Oct. 24 print edition of The Aylmer Express. (AE/Craig Bradford)