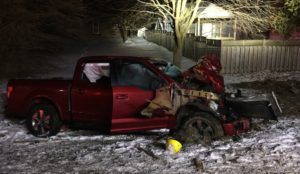 One unidentified person is dead and a man has been arrested after a crash that happened at about 3 a.m. on Saturday, Dec. 8 near the intersection of John Wise Line and Springwater Road in Jaffa southwest of Aylmer.

John Wise Line was closed at Quaker Road and Rogers Road and Springwater Road was closed at Southdale Line and Pleasant Valley Road for the investigation.

No further information was released by the OPP.