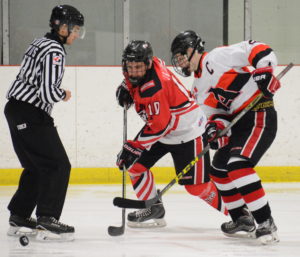 Aylmer Jr. C Spitfires captain Connor Lacey, right, battled for the puck against a North Middlesex (Parkhill) Stars player after a defensive zone faceoff during a Provincial Junior Hockey League game at East Elgin Community Complex on Saturday evening, Jan. 5. Aylmer scored twice early in the first period and held on for a tight 2-1 win. The Spitfires lost the night before in Lambeth 3-1. It was a busy weekend for the Aylmer squad as they also played in Lucan on Sunday afternoon and managed to edge the host Irish 5-4 by scoring the winning goal with three seconds left in regulation. The Spitfires were drastically outshot in both road games. The win over Lucan improves the Spitfires record to 13 wins, 19 losses and an overtime loss good for 27 points and sixth place in the nine team Yeck Division. Aylmer next travels to Mount Brydges on Friday, Jan. 11, an 8:15 p.m. puck drop, and hosts Port Stanley on Saturday, Jan. 12 at 7:15 p.m. (AE/Craig Bradford)