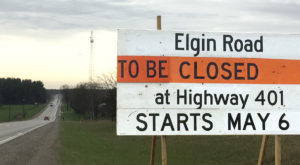 Drivers who access Highway 401 via Elgin Road (Imperial Road in Elgin), should expect detours starting this May and lasting into the fall.

The Elgin Road Bridge over highway 401 will be replaced this year. Demolition of the existing bridge, built in 1957, was scheduled to begin in May. Replacement of the bridge is part of a future plan to widen the 401 to eight lane. Widening of the highway was not planned as part of the current work.

The expected detour route, posted at the information website established for the project (elgininterchange.com), directs motorists to access the 401 by driving west on Cromarty Drive and north on Dorchester Road. In addition to the bridge reconstruction, the plan indicated the 401 would be closed for up to five nights while the bridge was demolished; during those nights, highway traffic would be detoured using the existing Elgin Road interchange ramps.

Motorists who would be heading eastbound on the 401 might consider an alternate route to the 401 by driving east on Cromarty Drive and north on Putnam Road, though this is not the officially marked detour.

No information was given about the carpool parking at the 401 and Elgin Road interchange. The nearest alternative carpool location is at Veterans Memorial Parkway and Bradley Avenue in London. The Elgin Road carpool lot has 28 parking spots, the London lot has 52.

The Express did not hear back from the MTO for comment on the project.