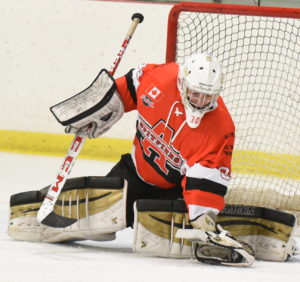 Goalie Tim Kerkhoff of host Aylmer Spitfires snagged a low shot on net during a Provincial Junior Hockey League game against North Middlesex Stars at East Elgin Community Complex on Wednesday, Nov. 20. North Middlesex tallied first with a goal at 14:33 of the opening period, but Brayden Smith of the Spitfires evened the score at 1 each at 18:40 of that period, on a powerplay. Aylmer’s Dillon Ward scored at 5:04 of the second period and Tommy Zufelt at 13:25 of the third to seal a 3-1 victory for the Spitfires. (AE/Rob Perry)