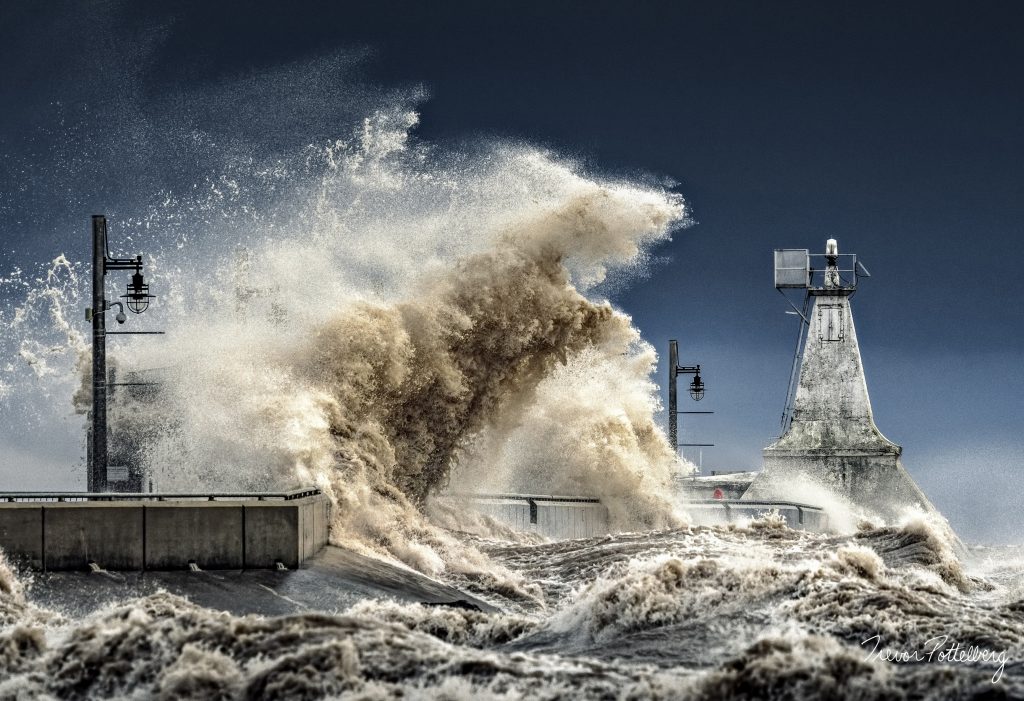 Trevor Pottelberg’s award-winning shot. It shows a massive wave as it crashes into the Port Stanley breakwater during a chilly day on December 30, 2019. It took Mr. Pottelberg about 20 minutes after he set up near the beach to capture this image, which was shot at 1/2000th of a second on a Sony A7R3. (AE/contributed by Trevor Pottelberg)

His photo, Pier Pressure, depicts a massive wave crashing into the breakwater in Port Stanley, with the main lighthouse standing strong in the background. It won the Best in Class Award in the press category and was selected for inclusion in the PPOC 2020 loan collection. 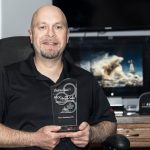 The PPOC 50th virtual awards gala was livestreamed online earlier this year. The event was originally scheduled to be held in Saskatoon, Saskatchewan, but the physical event was cancelled due to growing COVID-19 restrictions.

Mr. Pottelberg said one silver lining is getting to share the experience online with his family and friends, who wouldn’t have gotten the chance to attend other award galas due to the distance.

When it was time to announce the winner for the Best in Class Award in the press category, Mr. Pottelberg said his photo was up against two very strong photos, and that he didn’t know what to expect.

“My name popped up on the screen, and I just started screaming, hooting and hollering,” he said, on winning one of 22 categories. “It was a really great accomplishment.”

A panel of master photographers judged the best works submitted by professional photographers across the country. They judge about 500-1,000 entrants for each category.

Mr. Pottelberg took about 20 minutes to snap the award-winning photo on December 30, 2019 in Port Stanley.

“I wanted to try to include the main pier, and the old lighthouse that’s at the end of the pier,” he said. “I had to frame all that up at the right angle and then it was a matter of waiting for the right moment to have one of those huge waves crash into the pier.”

He shot the image using burst mode at 1/2000th of a second on a Sony A7R3 digital camera. The photo was only adjusted for contrast and brightness with digital editing software.

Trevor Pottelberg, a photographer based out of Brownsville, is no stranger to braving a cold night or adverse weather conditions to wait for the perfect shot. At top, “Frigid Bliss” captures ice covering the Port Bruce pier, with calm waves and the setting sun casting cotton candy colours onto the clouds and rocky shoreline. Below, “Galactic Rainbow” features the entire north to south view of the Milky Way, spanning the sky leading to the Port Bruce lighthouse. (AE/contributed by Trevor Pottelberg)

Lake Erie wave photography is best to shoot from October to December, said Mr. Pottelberg, and is something he looks forward to every year.

Capturing images of waves may seem straightforward on the surface, but can prove to be more of a challenge than expected.

“A lot of people do succeed with wave photography, but they don’t realize how intense the conditions are on the beach,” he said. The winds can reach over 80 kilometres per hour near the water at that time of the year.

“You may get pelted by all of the elements you weren’t expecting. Not only do you need to keep your camera steady, but there’s constant pounding of wind and rain, and the sand that’s dragged up against the beach.”

Mr. Pottelberg achieved his photography and advanced photography diploma from Fanshawe College, where he now teaches students in the same program. He has been a professional photographer for about 23 years.

Do you have any remarkable stories about local personalities? Write, call or email The Aylmer Express 519-773-3126 • info@aylmerexpress.ca

The Local Journalism Initiative is funded by the Government of Canada

Originally published in the Sept. 23 edition of The Aylmer Express.