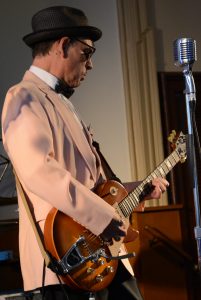 Michael “Frankie” Lambert of the vintage rock and roll band Frankie and the Fairlanes sang and played guitar to Good Rockin’ Tonight to kick off their show at Belmont United Church on Sunday afternoon, April 29. The song title is also the name of the St. Thomas based band’s new travelling show that celebrates the music, fashion and lifestyle of the 1950s and 1960s with some 1970s tunes thrown in. The concert also raised money for Belmont United Church initiatives. (AE/Craig Bradford)