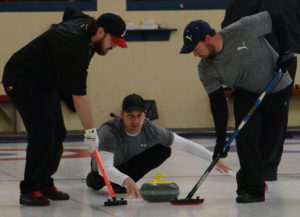 Jamie Nelson, middle, threw one of the last rocks for his team with Tom van Kasteren, left, and Mike Nelson waited to sweep during an early draw game of the Springfield Timber Mart men’s bonspiel held at the Aylmer Curling Club on Saturday, Jan. 5. The Nelson rink won all three of their games and scored a total of 46 points to take the early draw. The Weesjes team won all three of their games in the late draw and scored 47.75 points and were the overall winner of the bonspiel. The tournament attracted 64 curlers (16 rinks) from as far away as Kitchener-Waterloo, London and Tillsonburg with many local participants. Springfield Timber Mart has sponsored the bonspiel for over 40 years. (AE/Craig Bradford)