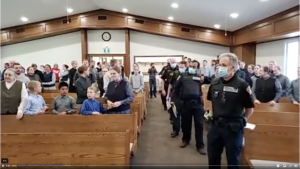 The Aylmer Church of God (Restoration) has been padlocked following a ruling by Justice Bruce Thomas of the Ontario Superior Court of Justice in St. Thomas Friday, May 14, about contempt of court findings against the church, Pastor Henry Hildebrandt and Associate Pastor Peter Wall.

Aylmer Police, in a statement, said Elgin County Sheriff’s officials, acting on behalf of the Ontario Ministry of the Attorney General, went to the church at about 4:15 p.m. to change the locks on the exterior doors in order to carry out Justice Thomas’s order.

Aylmer Police also were on hand to assist, and were met by congregants inside the church.

The Sheriff’s enforcement officers read out the court order and asked everyone inside the building to leave immediately. Police said they did so.

Aylmer Police and the enforcement officers stayed on the scene about two hours while a locksmith provided by the ministry changed the locks.

The building would remain locked up until provincial emergency orders were changed to allow churches to hold services inside at or over 30 percent capacity, police concluded.

This picture is from a video posted online on a Facebook site for Pastor Hildebrandt.