“We would be nowhere without these wonderful volunteers, and the community spirit, and it makes people feel good,” said Sandra Hoffer, a vaccine clinic volunteer coordinator. “It’s a great community effort.”

Ms. Hoffer was referring to the over 120 volunteers that, since March, have been helping at one of three COVID-19 immunization clinics in the Southwestern Public Health (SWPH) region of St. Thomas, Elgin and Oxford. The hard work of many volunteers from the community plays a big role in ensuring the clinics, overseen by SWPH, run smoothly and efficiently, while health unit staff and medical professionals administer the medications to thousands of area residents.

At the St. Thomas Mass Immunization Clinic, three volunteer groups help out, consisting of about 120 overall,: the Knights of Columbus, the Gujarati Club, and the Retired Teachers Association.

“It’s really great that the community has come together in this way, to heal and recover,” said SWPH Registered Nurse Samantha Fox. “There are different generations working together: a lot of volunteers have retired so they’re older, ohers are summer staff in university, so it’s a big age range.”

Volunteers are involved with nearly every step of the clinic, with the exception of administering the vaccine. The helpers work Monday to Friday and occasionally Saturdays, in separate morning shifts (8:30 a.m. to 12 p.m.) and afternoon shifts (12 p.m. to 4 p.m.).

In addition to helping out at clinics stations (screening, registration, staging and seating priot to vaccination, post-vaccination and checkout), volunteers also direct visitors throughout the clinic.

“Our volunteers are essential to our operation and we are extremely grateful for all that they do,” said Ms. Fox.

Anyone interested in volunteering should be reliable and be able to manage the tasks assigned. They are required to sign confidentiality agreements to protect sensitive information from being distributed. 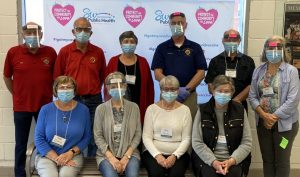 A shift of volunteers for the SWPH-led St. Thomas Mass Immunization Clinic assembled before returning to help at the busy hall. Front row, from left: Diane Somerville, Judy Holtby, Terry Collins, and Alanah Mitchell; back row: Otis Clifton, Case Hoffer, Pat West, Harald Schraeder, Gary Long and Sue Bowie. Some shown, including Mr. Hoffer, are members of the local Knights of Columbus service club, which has been coordinating a volunteer team to assist at the clinic regularly since March. (AE/contributed by SWPH)

Sandra and husband Case Hoffer of St. Thomas lead the Knights of Columbus volunteer group. The couple, formerly of Aylmer, are both retired: Sandra worked as a nurse about 10 years ago before retirement, while Case worked as a millwright at Ford 15 years ago.

The 20-person team is split evenly into two groups, who work morning and afternoon shifts. They began on Tuesday, March 23, and worked the first five weeks in a row; now, they alternate weeks because other groups have joined.

At first, “It seems like it’s very overwhelming, but it’s not,” said Sandra. Volunteers need to be able bodied, as there can be a lot of walking and standing involved in the work.

To train the volunteers, Sandra will walk them through the clinic to give them a feel for the task, and explain what is done at each station. She also introduces them to other volunteers and SWPH workers.

When they first began in March, volunteers mostly came from areas in between St. Thomas and Aylmer. Now, they come from opposite ends of Elgin County and everywhere in between, from West Lorne to Tillsonburg (which is in neighouring Oxford County).

Many are retired nurses, retired teachers, or regular volunteers at other organizations, such as the Canadian Blood Services. The volunteer attendance can vary depending on individual schedules, but Sandra said she has a list of people she can call upon if needed.

Case said there are varied moods of visitors who come through the clinic, ranging from happy and upbeat to apprehensive. Volunteers are ready to deal with whatever reaction comes their way.

“When people come in and they’re very nervous, our job is to settle them down, help with the flow, keep them moving through the whole thing, get them in and out and keep them happy while they’re there,” said Case. “It’s a positive experience for everybody involved.”

Visitors have even high-fived volunteers at the end of the process, added Sandra.

Paul Jenkins, Chief Executive Officer at the St. Thomas & District Chamber of Commerce, encouraged the couple to volunteer Friday afternoon, March 19. “He knew that we were big on volunteering, and they didn’t have a service group that had taken it on,” said Sandra.

They called some of their contacts, discussed the matter with SWPH, got a group of volunteers together, and got to work four days later.

The couple has historically been involved in community service and volunteering, including at St. Anne’s Community Festival, the Knights of Columbus and singing in a Florida church choir. Sandra was part of an effort that sewed and distributed about 3,000 masks to frontline workers in Elgin County.

Another group, the Retired Teachers Association, is run by John Laverty. They work morning shifts on alternating weeks.

“A great example for our children”

Swarndeep Singh took a selfie that included him, left, Sadia Bukhari, Parameshi Vyas, Trudy Kanellis and Bhavin (Bob) Patel. They are members of the Gujarati Club volunteer group that helps at the COVID-19 immunization clinic in St. Thomas. This group works four-hour afternoon shifts Monday to Friday, and occasionally Saturdays. Volunteers are involved with nearly every step of the SWPH-run clinics, with the exception of administering the vaccine. (AE/contributed by Bhavin Patel)

“The nice thing about volunteering is that we’re setting a great example for our children, and they’re helping out,” he said.

Mr. Patel resides on Lake Margaret Trail in St. Thomas with his wife, Avani, his 19-year-old son Raj, and his 12-year-old daughter Ritu. His wife and son also volunteer.

He works at Toyota Motor Manufacturing Canada, as well as owns Wayside Restaurant in Talbotville. The family immigrated from India to London in 1998, then later moved to St. Thomas in 2003.

“As an immigrant, this country gave us everything. It is our duty now to give something back to this country,” he said, on what motivates him to volunteer.

His group of volunteers works afternoon shifts from Monday to Friday, occasionally Saturdays, alternating weeks. Volunteers help to screen clients, direct them through the arena, and sanitize touch points.

“They tell us, ‘wow you’re doing such a phenomenal job,’ which gives us a lot more encouragement,” said Mr. Patel.

He also wants to help in whatever way he can in hopes of seeing the end of the pandemic as quickly as possible.

The majority of volunteers heard about the program through word-of-mouth. Anyone is invited to volunteer, with a requirement to be age 18 or over. They can do so by calling Mr. Patel at 519-615-0678.

Mr. Patel has offered community supports in various ways throughout the pandemic. Since early May, he and his Wayside business partner and chef Soman Sreedharan offer meals to people without shelter and food in downtown St. Thomas.

The program runs at Flora and Talbot Streets, running every Monday from noon until 1 p.m. Meals are distributed at Wayside and consist of both Indian and Canadian food. He plans to continue the program until the end of the pandemic.

Before that, in April, Mr. Patel and his team dropped off about 8,500 meals to people across Southwestern Ontario, including Port Stanley, London, Windsor, and even Toronto. With six volunteers at the beginning, they struggled, but more joined as the initiative went on.

Stacey and Sara Gaudette of Aylmer had a positive experience getting vaccinated at the St. Thomas clinic in late April.

“It was so well done, a really positive experience all the way around,” said Stacey. “From the security team guiding people in the parking lot, to the volunteers, and medical workers giving their time to get everybody through the system.

“I’ve been vaccinated before – this was seamless, darn near painless.”

They recognized some familiar faces while in the clinic, including a doctor that was a former neighbour of the Gaudettes, who has her own practice now in Port Stanley.

Stacey also attended while wearing a Kinsmen jacket and mask, as he volunteers with the Aylmer service club. While booking their second vaccine appointment at the end of the process, a Knights of Columbus member gave him a thumbs up and a wink.

“Because we’re both in service groups. It was really neat. Different groups, but same goal, service to the community,” said Stacey.

There was slight hesitation before getting the vaccine as Sara has lived with Multiple Sclerosis (MS) for about 25 years. The condition affects the brain and spinal cord. She typically does not get a flu shot for fear of side effects.

While her neurologist recommended she get the COVID-19 vaccine, Sara still had her concerns about the potential reaction. She sat unsure of what to do for almost one week.

“I said, ‘do you need me to just be decisive?’ And she said please,” said Stacey, adding Sara typically makes these types of decisions when it comes to MS. “So I said ‘all right, tomorrow morning, make your appointment, and we’re going to go.’ It was a rare moment.”

After they got their shot, Sara felt slightly fatigued for the rest of the day, and slight soreness in her arm, but felt fine other than that. Stacey experienced a harsher reaction, feeling tired and soreness in his arm for several days.

“It was interesting because she was the one we were concerned about. When it was all said and done, she did great. I was the one who ended up getting kicked in the pants,” said Stacey.

The Gaudettes are involved in volunteering with the community themselves. In addition to Stacey’s involvement in the Kinsmen Club, the couple have three sons, Joseph, Josh and Jack in the band Moore Avenue Underground, which hosts an annual food bank benefit concert.

They pay insurance out of pocket to rent the bandshell in Aylmer and play music. All the proceeds go to the Aylmer Corner Cupboard. The group is working on a livestream option for the event to proceed around Father’s Day weekend on June 20.

“When we first moved here, I had to go through a few layoffs at Freightliner. So we used the food bank ourselves a couple times and that was really something that stood out to the boys as being important to them,” said Stacey, on why Corner Cupboard was selected as a benefactor.

“For them, just the idea of being able to put food into hungry bellies was something that was really practical to them.”

The couple advocates for giving back to community, and encourage others to get involved in whatever capacity they could – whether that be through joining a local service club; hosting or donating to fundraisers; offering assistance with charitable causes; or doing smaller individual acts of kindness and volunteerism.

Many events put on by service clubs involve gathering in public places, which likely won’t resume until the threat of the pandemic fades, so helping out in at vaccination clinics might be one step towards getting back to those landmark community events.