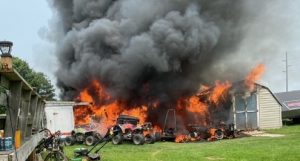 Nine all-terrain vehicles, three snowmobiles, a 1970s Harley Davidson motorcycle, a shed and a lean-to were all destroyed by a fire at 11262 Plank Road in Eden on Tuesday, July 20.

Bayham Fire and Emergency Services Chief Harry Baranik reported that firefighters were called out at about 1:40 p.m. after a passer-by reported the blaze in the backyard of a house to a neighbour, who called 911.

No one was home at the time, but another neighbour used a garden hose to cool down the siding on the residence to stop the fire from spreading further, limiting damage to the house.

The cause of the fire was not considered suspicious, and was believed to have been mechanical in origin.

The total loss was estimated at $45,000 for the vehicles, the outbuildings and the siding, he said. No one was injured.

Both Straffordville and Port Burwell fire stations responded to the emergency, with about 15 firefighters turning out.