A spokesperson for a national Jewish advocacy group said selling and promoting an item like this “is an exploitation of our community’s tragedy and pain.” That included victims of the Holocaust and “those who gave their lives to defeat the evil of fascism.”

About six-million Jews were murdered by the Nazis during that war. The yellow star badges were used to identify, round up, ghettoize and ultimately kill them. The badges have been used at other times over the last few hundred years to segregate, discriminate against, and dehumanize Jews.

The online storefront “KimberlysBusiness” was offering the stickers for sale last week for $5 each with a “bulk discount available.” Kimberly Neudorf, of Aylmer, has been an active protestor of COVID-19 restrictions and vaccines. She organized a rally at the town bandshell in October and was part of a second one in November at East Elgin Community Complex, drawing over 1,000 anti-lockdown supporters.

While the anti-restrictions and anti-vaccination movement has used plenty of Second Great War and Nazi imagery, this is one of the first times during the pandemic a symbol of Jewish genocide has been repurposed and marketed for sale publicly.

Jaime Kirzner-Roberts, director of policy with the Friends of Simon Wiesenthal Center for Holocaust Studies said the Holocaust and opposition to vaccines during a pandemic weren’t comparable.

“The Holocaust is not a metaphor for anything we don’t like in the world. It’s not a metaphor at all. It was a real experience that happened in living memory that involved the worst kind of barbarity and horror that human beings are capable of.”

She called comparing government actions during the pandemic to the Holocaust “a profound insult to the Jewish community and the tragedy we experienced. It’s also an insult to our veterans who fought so bravely in the face of the horror of the Nazis. And it’s an insult to our freedom and way of life in Canada. We’re just sick of it.”

She explained the use of the yellow badges in the war: “During the Holocaust, before they began kidnapping Jews and bringing them to the camps, the first step of that was forcing Jews to wear stars to identify as Jews. This was a fascist, violent, military society, nothing like the wonderful country we’re privileged to be living in here.

“Drawing parallels from this to what the Jews endured is appalling.” 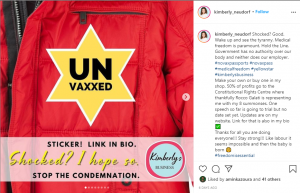 Local vaccine protestor Kimberly Neudorf recently offered these “UNVAXXED” stickers for sale. A spokesperson for a national Jewish advocacy group condemned the use of the iconography, which resembles the yellow star badges Jews were forced by the Nazis to wear as identification. (AE/screen capture: Instagram.com-kimberly_neudorf)

About a week after first becoming aware of it, the sticker was no longer listed on Ms. Neudorf’s website, which also sells t-shirts with slogans like “The media is the virus” and “Unmasked, unvaxxed, unafraid.” There’s also a shirt that teases Aylmer Mayor Mary French for admitting she cried when she saw the hundreds of people descending on Aylmer for the November rally that also marched through town and past her house.

The Express asked the online host of the storefront if it was taken down for violation of terms of service but has not heard back.

Ms. Neudorf, who has not responded to multiple emails and phone calls, said online on Instagram, “Etsy deactivated my listing! They must’ve been offended. If you want some just let me know and I can make a direct order but otherwise I’m sure you can make them yourself.”

In an earlier post, showing the yellow badge she was selling, she announced “Shocked? Good. Wake up and see the tyranny. Medical freedom is paramount.”

On a Facebook link to the stickers, Kimberly Charlton Neudorf liked a comment by Abe Wall that stated, “Is the iconography meant to resemble the badges the Jewish community was forced to wear during WW2 before being sent to their death?”

The listing was also shared through Freedom News Canada, which is a social media account that appears to be operated by Herbert R. Hildebrandt.

–by Brett Hueston of The Aylmer Express