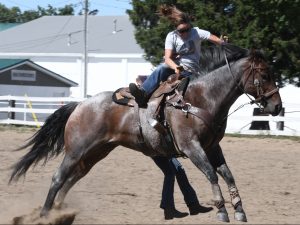 Rider Stephanie Bossence of London lost her seat, as had her rescued “victim” Jarrad McMillan just before her, during a Rusty Gaits Saddle Club horse show at the Aylmer Fairgrounds on Sunday, Sept. 19. The club is reviving “rescue races,” an event where a rescuer rushes to the far end of the ring, picks up a victim and then races back to the start. The show involved 60 competitors, who also brought donations for Corner Cupboard food bank in Aylmer. (AE/Rob Perry)