The assault trial for Herbert Hildebrandt, of Malahide, began Friday, Oct. 22, with only one prosecution witness testifying before day’s end.

Mr. Hildebrandt was charged with assault after allegedly pushing to the ground Jack Dykxhoorn, 84, of Malahide at the former Thompson family farm, across from the Church of God, at the north end of Aylmer, on Dec. 10, 2020. He and friends had put a “Be Kind Wear A Mask” sign near the church property and shortly after, it’s alleged Mr. Hildebrandt drove to the farm, confronted Mr. Dykxhoorn and others there, and pushed him down, which resulted in cracked ribs.

Justice Mark Poland twice rebuked Mr. Afolabi for his line of questioning with Mr. Dykxhoorn, saying he was asking confusing questions or didn’t understand their relevance.

The trial, originally slated for one day, will continue after additional court dates are scheduled. The dates will be announced Nov. 9. 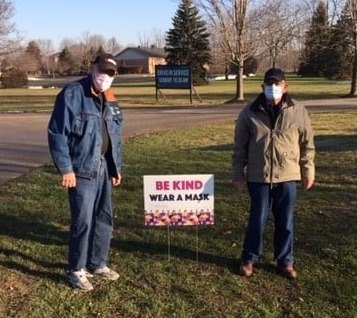 Joe Webber, left, and Jack Dykxhoorn stand beside a “Be Kind, Wear a Mask” sign they put up on the roadside at the entrance to Aylmer Church of God on Thursday, Dec. 10. Not long after, across the road, Mr. Dykxhoorn was allegedly pushed to the ground in a confrontation involving Herbert Hildebrandt. (AE/contributed by Walt Morgan)