Luca Kapogianes, with the puck, of host Aylmer Minor Hockey’s Under 9 Rep team got squeezed by two Walkerton players during the championship game of the “Rep Finale” tournament at East Elgin Community Complex on Sunday, April 3. The Aylmer team placed second in its 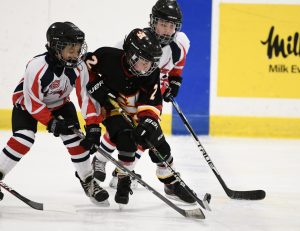 preliminary pool with two wins and a loss, then advanced to the championship after defeating Port Stanley 3-2 in the semifinal Sunday. Later that day, though, they lost the final to Walkerton 1-0, but still won the overall silver. (AE/Rob Perry)