Mr. Dykxhoorn, 84 at the time of the assault, Dec. 10, 2020, was pushed to the ground by Mr. Hildebrandt, approximately half the age and twice the size of Mr. Dykxhoorn. Both men live in Malahide.

It was not “a defensive push.”

Justice Poland said Mr. Hildebrandt brought the confrontation to Mr. Dykxhoorn, who had been having coffee with his friends before they decided to put the sign up near the church property.
Mr. Hildebrandt’s evidence, said Justice Poland that he couldn’t turn around as he feared for his safety, “was simply ludicrous.”

“He could have simply walked away.”

The next court date for Mr. Hildebrandt is August 30, to pick a date for sentencing. 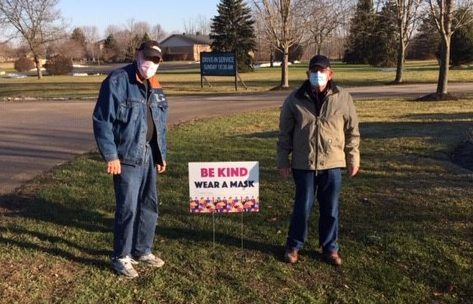 Joe Webber, left, and Jack Dykxhoorn stand beside a “Be Kind, Wear a Mask” sign they put up on the roadside at the entrance to Aylmer Church of God on Thursday, Dec. 10, 2020. Not long after, across the road, Mr. Dykxhoorn was pushed to the ground by Herbert Hildebrandt in a confrontation, an action which led to Mr. Hildebrandt being found guilty of assault on Monday, Aug. 22. (AE/contributed by Walt Morgan)