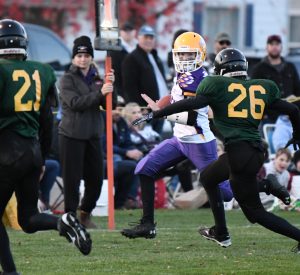 Gavin Russell of host East Elgin Secondary School rushed the ball down the sidelines toward the Tillsonburg Glendale goal during a game under the lights on Thursday night, October 27.  East Elgin won the game 45-12 and concluded a perfect season with five wins and no losses. EESS during the season scored 182 points, and allowed only 31 points to be scored against it. (AE/Rob Perry)