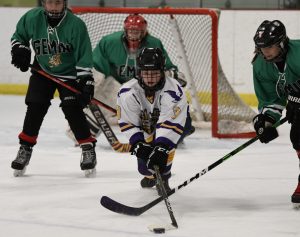 Dana Crinklaw of host East Elgin Secondary School kept a puck out of the reach of a Tillsonburg Glendale defender during the second period of a girls hockey game at East Elgin Community Complex on Thursday, Dec. 22. Later, she scored EESS’s final goal of the game after an end-to-end rush in the third period. East Elgin is undefeated so far this season with three victories.  (AE/Rob Perry)