Shelby Laidlaw, 17, of Luton in Malahide is competing as part of Team Canada’s Under-18 team at the International Ice Hockey Federation championships in Sweden.

She was born and raised in the Aylmer area, the daughter of Jody and Travis Laidlaw. Her sister Reece, 15, also plays hockey, as a forward for the BAD (Belmont-Aylmer-Dorchester) Girls.

Shelby is also a forward and has been since she started playing hockey in Aylmer Minor Hockey’s “Timbits” program when she was four.

“I like scoring goals,” she explained about her preference for offence play.

Her parents also played hockey, her father all his life and her mother starting as an adult, and that inspired Shelby to play as well.

After three years in the AMHA program, she switched to BAD Girls, and played there until she was a Senior Atom. Then, in Grade 7, she switched over to the London Devilettes, where she’s played ever since on a variety of age division teams. Her squad now includes a core group of veterans who have long played together. “We’re doing pretty well,” and hoped to “win it all” this season. Four of her Devilettes teammates were also selected for the team going to Sweden.

Shelby is a left-handed player, noting “I like to deke usually” as she approached the goal. “Usually toe-drags are my go-to,” pulling the puck out wide, faking a shot and then pulling the puck in close to her body to get it around the opposing goalie.

This won’t be her first taste of international competition. She was part of a Team Canada Junior Women’s team in 2019, playing roller hockey at a tournament in Barcelona, Spain. Her team ended up with a bronze medal, and she liked the experience, “playing for my country, and playing against some good players.”

With roller hockey, an ice rink wasn’t needed and given Spain’s southern location, “It did get very hot in there.” She also got a chance to travel around Barcelona and area. “It was really beautiful, actually.”

Shelby had wanted to do more international competition, possibly in traditional ice hockey, but then COVID “shut it down.”

The first year of the pandemic, everything toward the end of the season was cancelled, and the next, players could only participate in scrimmages and practices. “It was difficult. That’s when kind of your prime scouting is. COVID just kind of ruined it.”

Hockey finally got back to something approaching normal in the 2021-22 season, she said. While her Devilettes team did well during the regular season, they dropped off in playoffs.

She’d kept her skills up in the interim because her family usually put a rink in their front yard, and she sometimes also rented ice at arenas or got private training from coaches.

This season, her team was back to normal, and the Devilettes were doing really well.

She’d been invited to a Team Ontario Under-18 women’s camp, involving 80 players, last summer, but didn’t get selected for a team that time. However, she went to another later on, with 40 players, and got invited back, though she hasn’t heard yet if she’s made a provincial squad.

In the meantime, though, she got an invitation to be part of the Under-18 national team going to Ostersund, Sweden. She benefitted from two of her teammates formerly competing for Team Canada.

She got invited to a camp in August, attended by 40 players, and got cut, but she made another team for another international series, though only a three-game series against Team U.S.A. Then, at the start of September, she got a call asking if she wanted to be part of the squad going to the championships in Sweden.

“I was thrilled to be selected,” she said, especially after being cut earlier.

She left for the tournament on Dec. 31 and, after time to practise with her team, games were scheduled to start on Jan. 8.

Her goal for the championships? “Hopefully, win a gold medal.”

She’d like to score at least one goal and get some assists in three preliminary games. Canada’s in a tough pool, though, with U.S.A., Finland and Sweden.

Shelby Laidlaw of Luton is on that team.

Team Canada had already defeated Sweden earlier in the tournament,

Team Canada started the tournament strong with an 8-0 drubbing of Finland on Sunday, Jan. 8, followed by a 4-2 win over Sweden on Monday, Jan. 9, and a 3-1 victory over USA on Wednesday, Jan. 11.

Shelby’s team earned a bye, and then narrowly downed Finland 3-2 in overtime Saturday, Jan. 14, to advance to the final. 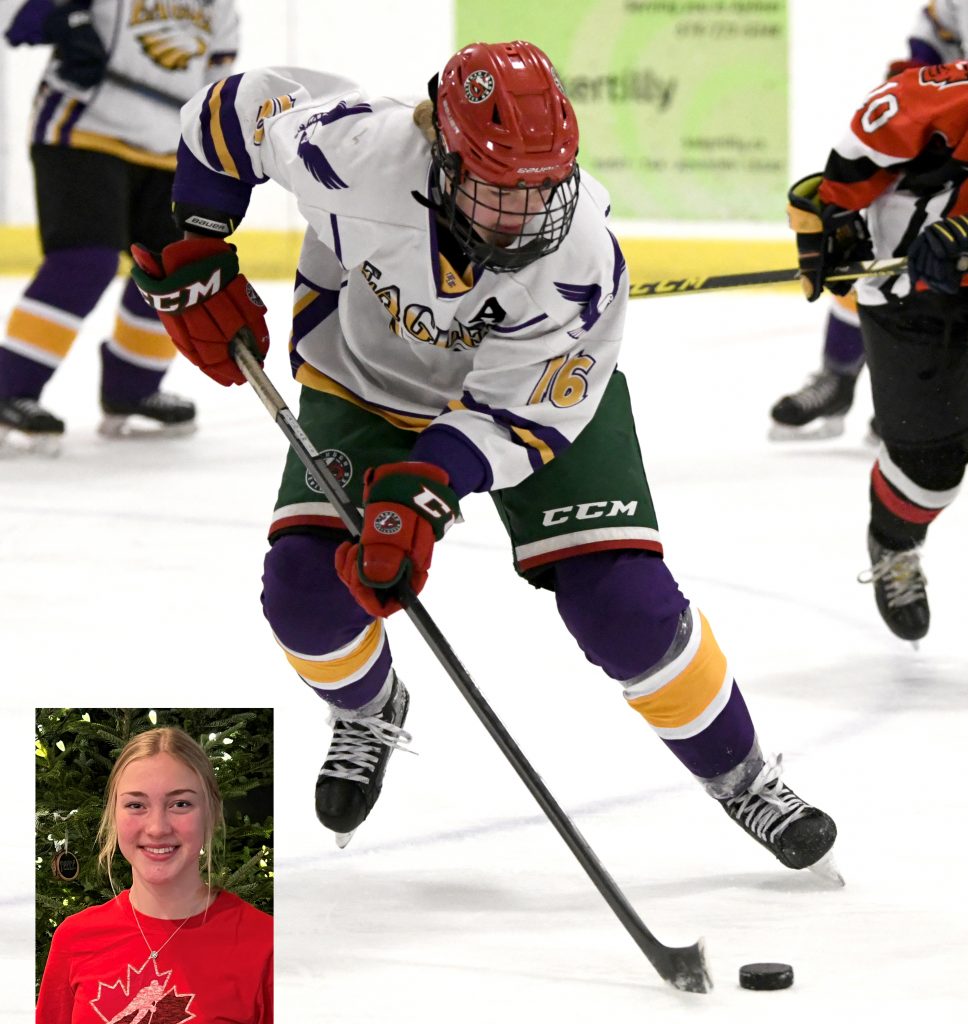 In January 2023, Shelby Laidlaw will play hockey for Team Canada competing against Women’s Under-18 squads from Sweden, Finland and U.S.A at an international tournament in Sweden. Shelby, also an East Elgin Secondary School girls’ hockey player, is pictured rushing the puck down the ice during a game against Tillsonburg Glendale at East Elgin Community Complex on Thursday, Dec. 22. (AE/Rob Perry)

Posted in Uncategorized
← U15 Local League team edged out 2-1