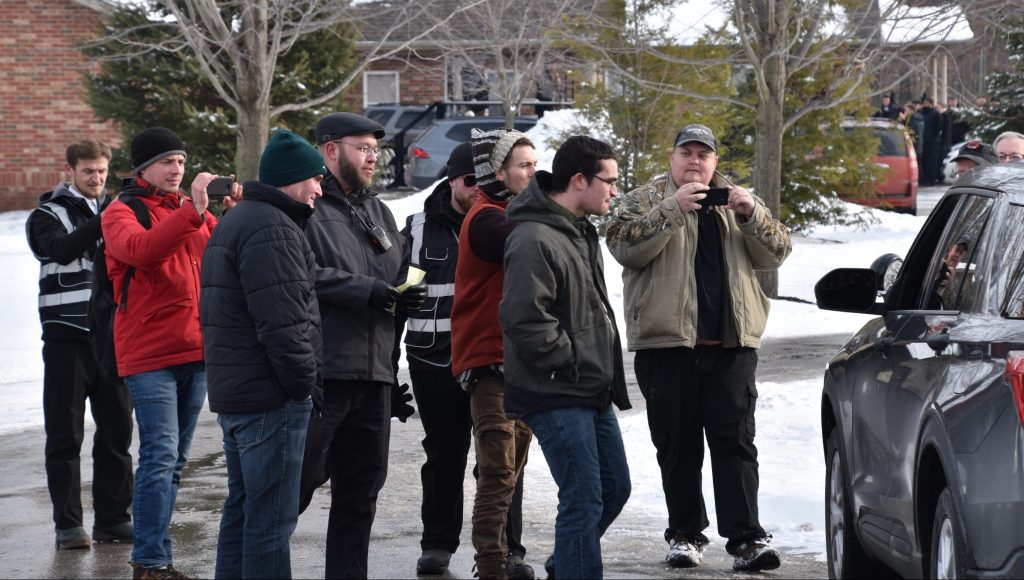 After receiving a summons for allegedly contravening the Re-Opening Ontario Act at Aylmer Church of God on Dec. 27, Herbert Hildebrand (fourth from left), son of church Pastor Henry Hildebrandt, ordered his supporters “Don’t let him leave” as the Aylmer Police officer returned to his cruiser. The men surrounded the cruiser, yelling at the officer. Mr. Hildebrandt said “This is what a coward looks like,” before a second police cruiser arrived. He then said “Let him go” as an officer approached to clear the men surrounding the cruiser. On April 14, 2022 Mr. Hildebrandt was found guilty of obstructing a peace officer. (AE/Brett Hueston)

Herbert Hildebrandt, 38, of Malahide, and Andre Beauchamp, 34, of North York, were both found guilty of obstructing a peace officer, in Ontario Court of Justice on Thursday morning, April 14.

That follows a trial for their actions December 27, 2020 at the entrance to the Aylmer Church of God.

After receiving a summons for alleged breach of Reopening Ontario Act restrcitions to church gatherings from Aylmer Police Constable Dan Wikkerink, Mr. Hildebrandt, son of Church of God Pastor Henry Hildebrandt, ordered men near him “Don’t let him leave”. Several men surrounded Cst. Wikkerink in his cruiser, while Mr. Hildebrandt demanded a video camera to record his scolding of the police.

Cst. Wikkerink had testified he was trying to leave the scene and diffuse a volatile situation.

Justice Robert Rogerson said Cst. Wikkerink “acted in a professional manner” during the course of the intense interaction.

Both Mr. Hildebrandt and Mr. Beauchamp were given an absolute discharge and a $100 victim surcharge. Justice Rogerson advised Mr. Hildebrandt to apologize in person next time he saw Cst. Wikkerink on the street.