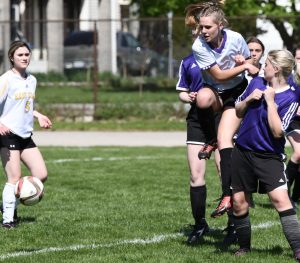 Sarah Simpson of host East Elgin Secondary School squeezed between two West Elgin Secondary School players as she tried to get to the ball during a Thames Valley Southeast girls soccer game on Thursday, May 12. EESS was victorious 4-0, improving its record for the regular season to three wins and one loss. The East Elgin girls will play their final game of the season at home on Monday, May 16, at 4:15 p.m. against St. Joseph’s Catholic High School, which also has a record of three wins and one loss, before starting playoffs on Wednesday, May 18. (AE/Rob Perry)