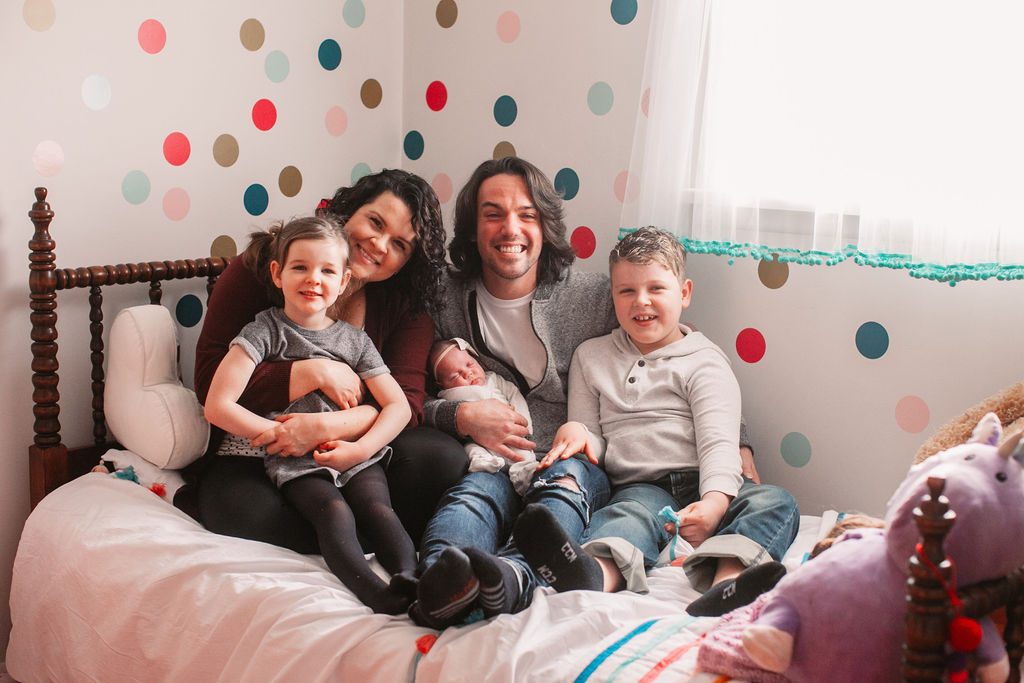 Jackie, left, second from left and Mark Stockford with their older children Kit, 5, left, and Oli, 9, and in the middle tiny baby Petra after the latter’s return home with her mother following three months in hospital in late 2020 after a premature birth. Petra weighed just one pound and five ounces at birth, but now, as her mother describes her, is a healthy and smart child. (AE/Contributed)

Jackie Stockford of Malahide said she has learned firsthand the great value of Ronald McDonald House Canada in London, which provides accommodations for parents of youngsters undergoing treatment in hospitals in that city.

When Jackie’s daughter Petra was born on Sept. 18, 2020, she was 12 weeks early, weighed only one pound and five ounces and was 10 inches long.

The fact she survived that long, and the C-section delivery, were miracles unto themselves, Jackie said. And while Petra spent months in Children’s Hospital in London slowly, so slowly, growing and gaining weight, Jackie spent 71 nights at Ronald McDonald House so she could be near her baby.

Because of the invaluable assistance provided to Jackie by RMHC over that time, she encouraged everyone to go to a McDonald’s restaurant on May 11 for McHappy Day, where proceeds of sales were dedicated to supporting the one in London and four others in Ontario.

Jackie and Mark are lifelong residents of Malahide Township. Mark works at ETBO Tool and Die, while Jackie is an Aylmer Express employee on maternity leave.

When they became pregnant for a third time, their newest baby was due on December 7, 2020.

Jackie went in for what was supposed to be a routine ultrasound to chart her baby’s growth at 20 weeks. “She was too small.” Development of her head was a few weeks beyond what it should be, her body another week and her legs even further behind.

She was referred to the maternal fetal medicine clinic at Children’s Hospital in London in August.

What she learned was that, through no fault of hers or her baby’s, the placenta around the foetus hadn’t formed correctly.

“It was a total fluke, and there was nothing they could do to fix it,” she recalled. They were told their baby was so far behind in development, her heart would have to work so hard that she’d be stillborn.

“There wasn’t any wriggle room. There was a zero chance” of survival.

But Jackie and Mark wanted to give their baby every chance at life, so they continued the pregnancy, despite warnings from the hospital.

The hospital supported them, but they were told, “There are no good outcomes from this. Her chances are just really, really slim.”

Jackie said, “But she held it together.”

The foetus grew just enough that the hospital admitted her for ongoing care. Generally, doctors wanted to see a baby have at least 500 grams of weight—just over one pound—before a premature delivery, but Petra was estimated to weigh just 212 grams when Jackie checked in.

“There wasn’t a good reason to hope. We were very adrift.”

Jackie was admitted in September and, after two weeks there, the foetus started to decline and show signs of stress.

Doctors decided the risk of a delivery was less than keeping Petra in the womb, so a Caesarian Section was performed to remove the baby.

“And she has just been our little miracle, really.”

She was born after just 28 weeks and four days in the womb, “but who’s counting?”

Babies born that small didn’t wear clothes because their skin was too sensitive, and Petra was kept in an “isolette,” an enclosed, clear plastic crib that kept her warm in the neonatal intensive care unit.

Petra had a feeding tube, “and so many wires and leads coming from her.”

Jackie bought her baby her first outfit at Christmas. Not many manufactures made clothes for premature babies, and Petra was still smaller even than that.

She found a line of baby clothes that came with matching outfits for dolls, and bought one for a female adult doll that fit Petra. 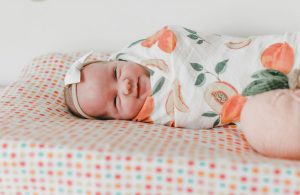 Petra remained in a fragile state for a long time, with hospital staff constantly taking blood samples to assess what was happening in her body, trying to keep everything balanced.

Sharing her experience would have been difficult at the time, but now with Petra developing more normally, Jackie liked doing so.

Petra would probably be small in stature all her life, “but she had cheeks and thighs and subcutaneous fat now. She is still less than the one percentile for her age group for height and weight, but she’s a healthy, happy baby now.”

“Nice to have someone”

Turning to her stay at Ronald McDonald House, Jackie said it had been suggested as a possible option just before Petra was born, by a social worker. Jackie lived far enough away to qualify to stay there.

After Petra was born, a nurse got them set up with the paperwork they needed to complete. “It was so simple.”

Being in the middle of a pandemic, residents, who were normally encouraged to eat together and support each other, had to stay apart.

While some residents stayed there in family units, Jackie had to deal with all this while Mark stayed home with their other children, who needed attention of their own. They stayed apart out of concern of potential COVID-19 infection.

With the pandemic, “It was a really strange time,” but the RMHC staff was amazing, keeping tabs on every resident to ensure they had whatever they needed. They knew she was by herself, so, “It was really helpful.”

She met one family from Windsor, there because of a birth injury to their baby, and she’d have tea with the other mother, but sitting eight feet apart on separate couches.

“It was nice to have someone,” but Jackie would also see that couple’s young daughter, who reminded her of Kit. “I was sad to see them, because I missed my family. I was missing my family so much.”

The RMHC house was an incredible place, and her children would have loved it, she noted, but they were going to school at the time.

Without RMHC, she probably would have stayed at a hotel to start, but eventually would have had to make her peace with driving back and forth, despite all the additional risk that meant for Petra. RMHC, by comparison, charged a nominal fee of just a few dollars, and that included meals.

If anyone needed a personal item like shampoo, “They call it the magic closet, where people donate things,” even baby clothes.

When Jackie and Petra returned home in December 2020, the baby was given an “Owlet Smart Sock” to monitor things like her heart rate and blood-oxygen saturation, countering some of the worries that came with not having a fully-equipped hospital right at hand.

Jackie said she had trouble enough sleeping herself, and wouldn’t have been able to cope without the sock. “It took a while to trust her to be a baby.”

On Wednesday, May 11, McDonald’s independent franchisees and Canadians coast-to-coast, including in Aylmer, will come together to support RMHC and local children’s charities through McHappy Day. All day, a portion of proceeds will be donated to RMHC and other children’s charities across Canada.

RMHC hosts families like the Stockfords, who spent over 70 nights at RMHC Southwestern ON. Staying at RMH allowed Jackie and Petra to get to know each other, so eventually when Petra did come home, Jackie was still her constant, and it was a little less scary for both of them.

RMHC supports families by providing: the comforts of home including private bedrooms, fresh meals, and laundry facilities; access to full wellness programming as part of their healing journey; and network of support from others who understand the unique challenges of caring for a sick child.