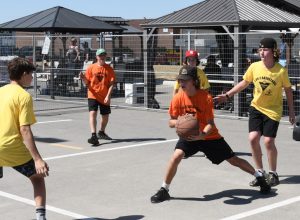 A player looked for a teammate to pass to during a “3 on 3” basketball tournament on two improvised courts at the Canadian Tire store on John Street North in Aylmer on Saturday, July 16. The event, involving five teams, was a fundraiser for the Malahide Athletic Centre. Albert Loewen on behalf of organizers said a non-profit group was working with Baribeau Constructions on plans for an indoor athletics facility in Mount Salem. The building would be 200 feet long by 180 feet wide, large enough to house soccer pitches on one side and basketball courts on the other. (AE/Rob Perry)