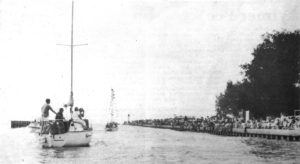 About 2,000 spectators lined the pier along Catfish Creek for the boat parade at Port Bruce Day, August 12. More than 50 decorated boats took part in the hour-long parade.

Wilf McKee, ratepayers association president, said “I thought it was a tremendous success. It was just the greatest thing I’ve ever seen.”

He said up until the morning of the parade he was afraid not too many boat owners would be participating, and then he took a walk up to North Erie Marina.

The marina was “just packed” with decorated boats, he said, and more were waiting to be launched.

The boat parade was the big event of the day, he said, but other events, including hay rides, went over well, “especially with the young people.”

After dusk, about 100 spectators attended a slide show on the Feb. 11 flood that caused the formation of the ratepayers group, he said.

The day was a revival of similar events held in Port Bruce during the 1950s, Mr. McKee said, and was just about the same except for a few less sporting events, such as a greasy pole contest.

“It just about went perfect,” Mr. McKee said, adding “I think we’ll make a few little changes and it will go over bigger next year.”

He credited residents Larry Odanski and Sandra Bayliss with doing “90 percent” of the work organizing the day.

He said when he came down Catfish Creek on his own parade entry, the pier “just looked like a grandstand.”

He said he was happy to see all the people who came down to Port Bruce, adding he hopes the day will become an annual event.

Mrs. Bayliss said the boat parade and other events “lived up to more than I expected.”

The boats this year were “bigger and splashier” than boats entered in the 1950s parades, she said, but had about an equal amount of work put into them.

There were enough residents around who remembered the boat parades to give tips to younger entrants, she said.

The day “really pulled everyone (in the community) completely together,” Mrs. Bayliss said.

She added it was ironic had it not been for the severe flooding February 11, the ratepayers association would probably have never have been formed, and the Port Bruce Day would not have taken place. 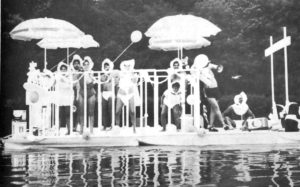 Family and friends helped Larry Odanski with his entry in the boat parade, built in honour of the birth of his and his wife Rita’s first child two months ago. It won the prize for the most humourous entry. 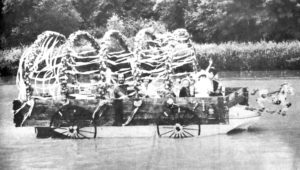 Peter Ungar of RR2 Aylmer, family members and friends ride in his entry in the boat parade, which won the theme prize. Mr. Ungar said the entry took about two days to build, though planning took longer.

The “Cypress Gardens” decorated boat entry was one of the prize winners Sunday afternoon. The boat was decorated by Bill and Gladys Deane, summer residents in Port Bruce, with help from daughter-in-law Holly Deane and son-in-law Gerry Hooghiem, riding in the boat, and waterskiers, son Bob Deane and daughter Lou Hooghiem and grandchildren Michelle and Billie Hooghiem.