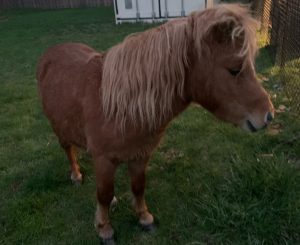 This miniature horse has been reunited with its Malahide owner after roaming through Aylmer late Tuesday, April 26, and early Wednesday, April 27. Deputy Chief Nick Novacich of Aylmer Police said officers first came across the horse as it roamed neighbourhoods along Talbot Street West Tuesday at about 10 p.m., but they were unable to secure it before being called away on a more urgent matter. Wednesday morning about 6 a.m., a Marchant Street resident reported the horse had wandered there, and it was secured by officers in a yard. Police issued an Internet appeal seeking the horse’s owner, who made contact and picked up the animal shortly after 10 a.m. (AE/contributed by Aylmer Police)