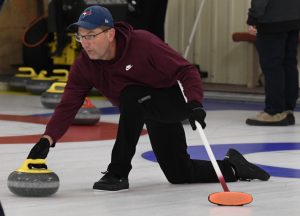 Jeff Vansevenant released a rock during a Senior Men’s Curling League match at Aylmer Curling Club on Thursday morning, Jan. 5. League convenor John Eitel said 43 men had signed up for the league this season, and usually played Monday and Tuesday mornings at 9 a.m., with a Thursday option for those who wanted additional time on the ice. On this day, three of the club’s four rinks were in action. (AE/Rob Perry)